A  Walk In The Woods - Rediscovering America 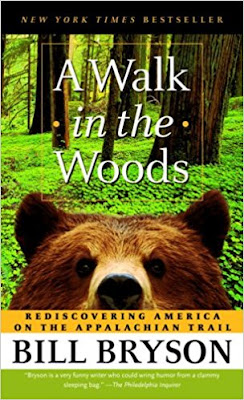 This was under the category:  A Book With a Country or City Name in the Title

This is a non-fiction story of the author's attempt to walk the Appalachian trail.  In 1996 he decided he was going to try this, after hearing about the number of people who complete it each year.  He didn't have much hiking experience, but felt that if he tried, he could complete the over 2000 miles of hiking in 5 months.

He was wrong.  He took a long an old friend on this journey.  He started in early March at the southern most tip of the trail and started to walk north.  (the trail goes all the way to Maine).  After walking for nearly 5 weeks, he came across a map that showed that they had barely touched the trail.  He felt discouraged, and decided to go about this a different way.  He wasn't FORCED to walk the trail - he was doing it for fun.  So he decided to go to the parts of the trail he wanted to see - areas he wanted to accomplish.

In the end he walked over 800 miles of the trail.  He was in better shape than he had ever been before.  He met many people along the trail who he came to admire.  He climbed tall mountains and got lost.  He slept in a tent in the rain and trudged through several feet of snow.  He said he hoped that during succeeding summers he would go back and see other parts of trail.

This was a great book.  He was a great writer with wit which made the book an easy read.  He talked candidly about the hardships he had on the trail, and the oddness of some of the people he met.  He talked about how the trails are slowly going into disrepair due to the limited budget and low staff of the national park system.  He talked about how different the trails look now to when they were first designed.  I loved the side stories he told about the cities he visited and the states.  Overall - he made me want to try it.  Would I ever?  No way.  But the idea is what he makes you excited about.

Check this book out.  It is one not to be missed.


Posted by PletcherFamily at 1:58 AM