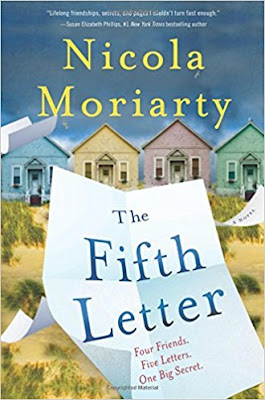 This was under the category:  A Book Published in 2017

This is the story of 4 best friends who have been together since high school.  Every year they get together for a long weekend - just the 4 of them - to enjoy time away from life, kids, husbands....and to just rekindle their friendship.  At the beach house, Joni decides it would be fun if each woman writes a letter - anonymously - about a secret that none of them know.  They would read one letter a night at dinner.  There wouldn't be any judgement, just advice from friends.

As each letter is read, the women try their best not to judge and to just give advice and support.  Joni, though, when cleaning out the fireplace discovers the left over pieces of a letter.  She does some tracing on the house computer and finds that someone wrote a fifth letter and then destroyed it.  This letter is filled with hate for someone in the group and it worries Joni.

When the girls get back home, Joni tries to discover who wrote the letter.  It wasn't until one of the girls in the group hosts a party that the truth comes out and Joni knows their friendships will never be the same.

Add this to your list this summer - you won't be disappointed.