Today's review is for a book called:  Christ in Concrete 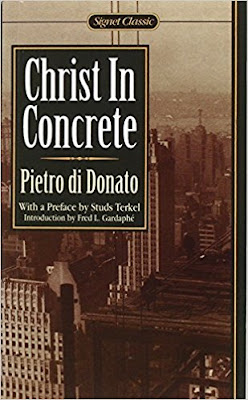 It was under the category: A Book About an Immigrant/Refuge to the US

This book takes place in the 1920s.  Although it is written as a fictional story, it is based on events that happened to the author as a boy.  The main character is a 12 year old boy whose father dies in a horrific building collapse and is entombed in concrete on Good Friday.  The father has a brother, Luigi, who promises to help the family, but he goes to work and is injured to the point that he can no longer work.  The 12 year old boy, Paul, has to go to work as a bricklayer to support his mother and his siblings.  He has to leave school and work construction - not the life he had envisioned.  Because Paul is so young, he gets paid very little as a bricklayer.  He soon overworks himself trying to make enough money, and has to leave a job.

Soon he finds a better paying brick-layer job and then later beings working on skyscrapers.  He talks about working above "the toy world below".  A close friend of his, and mentor falls to his death while working at one of the job sites and Paul decides at this point he no longer believes in God.  With the death of his father and then of a close friend, he finds no reason for faith.  His mother is upset with his decision, and Paul tries to make it up to her.

This book is labeled a classic, and I tried to like it.  I liked the idea of it, and a lot of the story.  I had a hard time with the writing.  I keep coming back to these books - written in the late 1800s and early 1900s and think I can make it work, but I can't.  I struggled with this one, even though it wasn't even 250 pages.

My grandparents were Italian immigrants.  They came here and worked in the mines and in the mills of Pennsylvania.  There lives were hard, so it did ring true to me how hard immigrants who come to America have it.  Some make it - like my grandparents - and some don't.  All work was dangerous, low pay, and unforgiving.  So I was drawn to this story because of my own background.  However - that darn writing style.

Anyway - if you aren't a big baby like I am, and enjoy the writing style of the early 20th century - don't pass up this book.