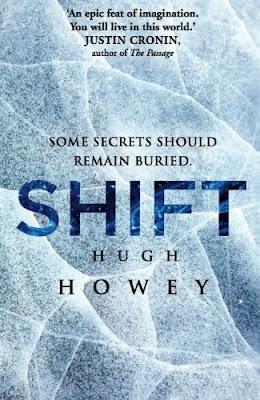 This is book two in the Wool Trilogy.  This book takes us back in time to the year 2039 when the silos first became an idea.  The main charater - Donald - is a senator who has been brought on the project to help build the silo.  He was an architect before we ran for government office, so he is to design something that can go underground for over 100 floors.  He spends months and months profecting the design.  When it is finally put into place, he finds out that it wasn't just for one silo, but for 50.  And that instead of them being used "in case", they would be used to save the human race.

The book starts to jump forward a century at a time.  People who were placed in the silo in 2039 are being woken for 6 month shifts to keep the silos running.  Donald is awake and starting a shift, but his memory has been wiped and he thinks he is a man named Troy.  He is given a daily pill to keep his memories at bay, but as he starts to refuse the pills, he starts to remember who he was and what happened.  Each time he is awake, he remembers more and tries to solve the mysteries of why the silos exist, what happened to his wife, and what is happening in the other silos.

I liked this book as much as the first.  It opened the world and gave us an insight on how it all began and who is running the silos.  We learn the reason they were put into place and see how they evolved to where they were during the first book in the year 2300.  We also get to see how Jimmy (aka Solo) started alone at the age of 16 until he was found by Juliette.

I encourage you to read this series.  I am looking forward to reading book 3