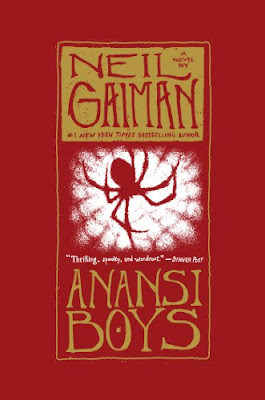 This is the story of Charlie Nancy.  The people close to him call him Fat Charlie.  He is an average guy who is engaged to an average girl, has an average job, and and average life.  His father passes away, and even though they aren't close, he attends the funeral.  During the funeral, he spends time with his father's old neighbor who tells him that his father was a god.  He also found out that he had a brother, Spider.

Soon, Spider shows up on Charlie's doorstep and Charlies life begins to fall apart.  He gets blamed a work for a crime he didn't commit.  His fiance starts to fall for Spider and forget about Charlie.  Spider starts to wear out his welcome, and Charlie learns that he and Spider have both inherited a bit of their father's godliness.  Charlie and Spider's dad is the trickster god named Anasi.  Charlie decides he needs to learn more about his father in hopes that helps him get rid of Spider.  Charlie - with the help of some of his father's old neighbors - delves into the world of the gods and that spins things out of control for both him and Spider.

This was a pretty good book.  I am a Neil Gaiman fan, and this book did not disappoint.  This book is supposed to come after his "American gods" book, but you don't need to read that in order to read this.  There is light comedy, horror, twists and turns, and general Gaiman great writing.  It book flows nicely and it was hard to put it down.  He weaves the characters together well, and it really made the story work.

I highly recommend this book.  You really cannot go wrong with anything by Neil Gaiman in my opinion, so check it out.