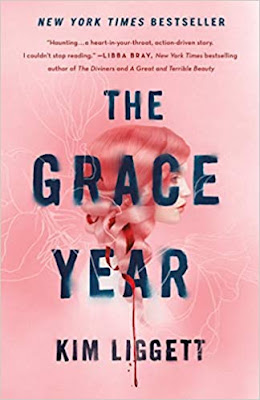 This is my 62nd book of the year
This is the story of 16 year old Tierney.  Born into a society who believes that women have magic powers.  Girls during their 16th year are banished into the wild to relase their magic so that they can come back to society ready for marriage. However -not all girls that are released during their "Grace Year" return.
Tierney - who doesn't want to be a wife, but is destined to be one anyway - is told that the poachers who hunt the girls during their Grace Year is her biggest fear.  However, she soon realizes that isn't the biggest threat.  As Tierney starts to piece together what the magic really is, why the girls - who are forbidden to talk about the Grace Year  - look so broken when they return, and what all of this means for her own future, she sets to change things.  However, she soon realizes that this will be harder than she imagines.
This book wasn't great.  It was way too much like the Handsmaid's Tale (which is it touted for).  I was looking for some originality in my favorite genre, but got more of the same.  Another society where men see women as property.  The love story that develops escalated so quickly that it was hard to believe.  Instalove is never for me.  There wasn't a lot of character development.  I really never developed feelings for any character in the book - not even our heroine.  This isn't a slow burn, and that is possibly why.
Handmaid's Tale and Hunger Games this is not.  For a 400 page book, I was hoping for more.
Stars: 3

Posted by PletcherFamily at 3:13 AM