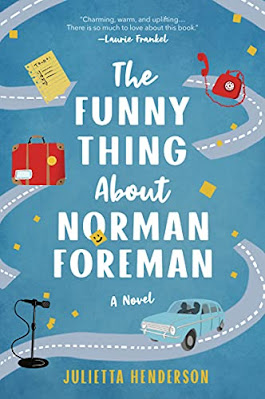 This is my 72nd read for the year
This is the story of Norman.  A 12 year old boy who just lost his best friend, Jax.  The two had planned on becoming a comedy duo at the Edinburg Fringe when they are older.  When Jax dies, Norman decides he needs to do this festival himself as a tribute to his friend.  What he realizes as he starts his journey that Jax was the funny one of the group.
When Norman approaches his mom, Sadie, about his idea of doing the Edinburg Fringe, she wants to do what she can to help him.  Norman is lost without his best friend, so she tells Norman that she will help him.  Norman has another request - he wants to find his father.  Sadie enlist the help of her friend and co-worker - an 80+ year old man named Leonard - to help them.  The three set off on a wild adventure to meet the men that could possibly be Norman's father and help him fulfill his dream of stand up comedy.
This book is so sweet and heartwarming, you will want to read it all at once.  Sweet Norman, who just lost his best friend, pulls at your heartstrings as you easily imagine what it would be like for one of your own children.  Sadie - a mom who loves Norman more than anything else in the world, but who cannot fathom how she is going to pull this off without watching Norman get his heart broken.  And Leonard - a sweet old man who is savvy with the internet drives them wherever they want to go and is Norman's biggest cheerleader.  The story has one great turn after another where you are rooting for Norman to be successful in his quest and regain some happiness after his tragic loss.
Definitely read this one.  You won't be disappointed.
Stars: 4 1/2

Posted by PletcherFamily at 3:30 PM