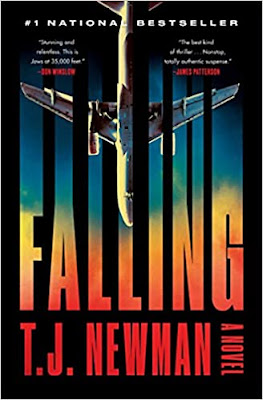 This is my 82nd read for the year
Bill is a stand up guy.  A pilot, husband, and doting father of 2.  He has been asked by his boss to take an extra flight on a day he was supposed to be at his 10 year old son's first baseball game.  But when the boss calls, you have no choice but to go.
Bill's flight starts out like any other, but as soon as he takes off, he finds out that his family has been taken hostage.  Bill is given a choice - crash the plane, and his family lives.  Save the plane and his family dies.  He is told there is also a "mole" on the plane to make sure that Bill makes his choice.  Bill has limited time to decide the fate of 143 people on his plane or his family.  And he must figure out how to save both.
This book was just okay.  I listened to it while doing projects around the house,  It was quick but only slightly suspenseful.  I love a good thriller book that keeps me wanting to turn the pages to see how it ends.  This wasn't one of those books.  The best character in the book was the flight attendant called "Big Daddy".  It was leaning more toward cheesy than scary - the target of the plane on the ground tipping the scales to cheesy.  However - like I said - it kept me entertained.
Not a book I would consider literature by any cost, but if you have some time to kill for an audio book while doing mindless tasks - this one can pass the time.
Stars: 3

Posted by PletcherFamily at 10:02 PM