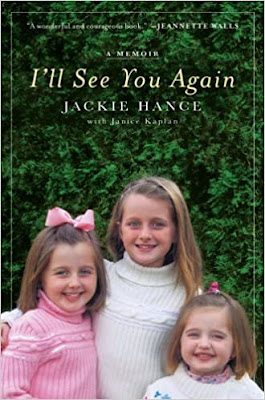 This is my 100th read for the year
This is the memoir of the author - Jackie Hance. In 2009 her three daughters were killed in a tragic car accident when Jackie's sister in law, Diane, was driving her family and her three nieces home from a camping trip. No idea what happened to Diane to cause her to drive for 2 miles down the wrong side of the highway and kill herself, her daughter, and her three nieces - Jackie's three daughters, and three people in the other car she slammed into.
This book covers Jackie's recovery in the 3 years after her daughter's death. Her unimaginable loss became headline news and gave she and her husband unwanted attention when all she wanted to do was grieve for her children. What follows that tragic day is a steady stream of friends that held them up and forced them to go on. Jackie learned to move forward and eventually gets pregnant with her 4th daughter, Kasey, who gives she and her husband Warren meaning to go on.
This is a hard book to review, so I won't. I will just say that I cannot even imagine what it would be like to lose all of your children - especially in a tragic accident that even today there is no clear answer to what happened. There is a documentary called "Something's Wrong With Aunt Diane" which chronicles the accident and Diane' family trying to figure out what happened that caused an accident that killed 8 people. This book covers Jackie's intense grief, and her almost constant thoughts of suicide in the first year after the accident (in case that is a trigger for any readers). Her friends are to be commended for their endless committment to her.
I listened to this book, and even though it was nice to hear the author speak about her own story (since she never really spoke publicly about the accident) she is not a professional reader. But I am glad that I read this because this side of the story was not anywhere in the documentary and I did wonder how she was coping with the loss of all of her children.
Take a look at the documentary and then read this one to learn more.

Posted by PletcherFamily at 3:22 AM