Book Challenge 2022: A Book About or Set In A Non Patriarchal Society: The End Of Men

Book: The End of Men 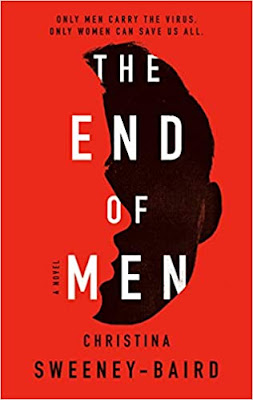 This is my 5th read for the year
In the year 2025, a virus hits Europe that no doctor can explain.  It seems to be only affecting men/boys - killing them fast.  Women are immune, but carriers of the disease so they can pass it to any men around them.  The doctor who first realizes that something is very wrong puts out an SOS, but it falls on deaf ears until it is too late.  The virus spreads around the world killing billions of men and boys before a vaccine is found.
The book - told by several characters (doctors, historians, scientists) document what happens when a world is turned upside down.  a small % of the men are immune.  How do you continue on when your husband and your children die?  What can be learned from mistakes made?  How do you continue in a world that has completely changed in terms of workfoce, population and family.
This was a pretty good book.  I am a big dystopian fan.  It is my #2 favorite genre after non-fiction.  So I always jump at a chance to try them when I see them.  It crosses 6 years of time during the plague from discovery, through loss of so many, to finding a cure, to moving forward.  It wraps up nicely- some people get their happy endings.  You root for the characters who lost all their children and their husbands - to find faith in love and life again.  I would say that the world seemed to deal well with the loss of billions in terms of availability of goods/services, which was unrealistic to a point.  They did have rations given to them.  But it was pretty "surface" discussed where I think it would be a much bigger deal.  And going through a pandemic right now - we all know even on a much smaller scale that this isn't possible.
I listened to the book, and I recommend taking it in this way.  Most of the characters are European, and they did a great job with different voices/readers to separate the characters.  Helps keep them straight.
Stars: 4

Posted by PletcherFamily at 8:46 PM