2022 Challenge: A Book About A Found Family: Under The Whispering Door

Book: Under The Whispering Door 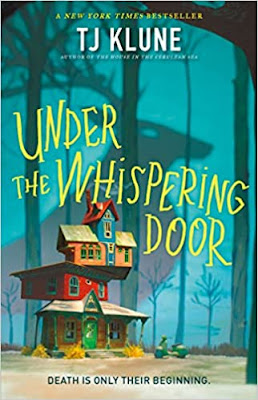 This is my 16th read for the year
This is the story of Wallace.  Wallace -a man who lacked kindness and empathy in life dies of a heart attack.  A reaper finds him at his own fundral but Wallace refuses to believe he is dead. It isn't until he meets Hugo - a ferryman - that is realizes it is really true.  Hugo promises Wallace that he will help him to cross into the afterlife when Wallace is ready.  All Wallace has to do is say the word and walk through the door.  But Wallace doesn't know if or when he will ever be ready.  So instead,he stays at the Tea shop with Hugo, his reaper, May, and Hugo's grandfather Nelson.   While in the tea shop, Wallace becomes a different person.  He becomes the person he wishes he had been in life.  When he is given one week before he is forced to cross by The Manager, Wallace does everything he can so that Hugo, May and Nelson always remember him.
This was a pretty good book.  I really enjoyed Klune's first book-The House On The Cerulean Sea - and liked that one a bit more.  I loved so many things about Under the Whispering Door, though.  Most of all - their thoughts about what happens when you die.  How each person gets assigned a reaper and a ferryman, and isn't forced to go until their are ready. No living person knows what is beyond the door-it is different for everyone.  The characters were all likeable-especially May the reaper and Nelson the grandpa. IT is well written like his other book.  The downside is really that it is overly sweet.  The sweetness is something I enjoyed about Cerulean Sea, but this was just a bit too far.  It started to lose meaning because it was a bit over the top.
Otherwise - if you liked Cerulean, you will like this one.  The story itself is a good one.
Stars: 4

Posted by PletcherFamily at 6:18 PM