Today's Review is for 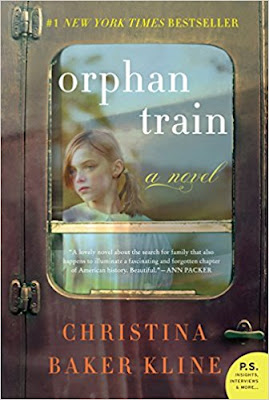 This is under the category: A book recommended by your oldest family member

This is the story of two people - Molly (a foster care kid that has been troubled her whole life) and Vivian (a kindly old woman who is looking for some help around the house).  Molly gets caught stealing a book from the library and is sentenced to community service hours.  Her boyfriend gets her a job helping Vivian clean out her attic.  During the clean out, Vivian begins to tell Molly her story of being an orphan on the orphan train in the 1930s.  Her entire family was killed in a fire and she was sent on a train to the midwest to be adopted by a family.  What ended up happening is she basically became a slave for families who were looking for help.  She meets a young boy her age on the train and helps care for a small baby.

Her life for a few years is very hard.  She finally is adopted by a nice family and marries, has a baby, and has a wonderful life.  But she never forgets what happened to her.  Molly and Vivian share a common background, and Molly soon finds a deep friendship with Vivian that she has never had with anyone else.

This was a fantastic book.  I love true stories, and this is a historical fiction story related to the actual orphan trains of the 20s and 30s.  Most of those kids who were not babies were taken into families to be laborers, maids, or store workers.  They were not adopted to be loved and cared for and they had hard lives.  Many ran away or were killed or abused.

I highly recommend this book.  Check it out.

Stars: 5
Posted by PletcherFamily at 4:22 PM No comments:

Holy Moly it has been a long time since I have posted.  We spent the entire month of July getting our house ready to rent and then we moved to Switzerland.

But now I am back on track.  So today's book I am reviewing is

A  Clash of Kings 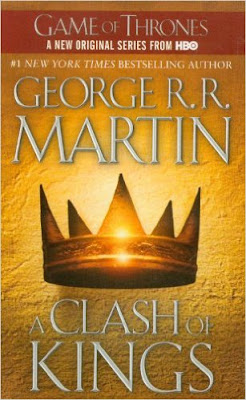 This was under the category:  A book over 500 pages

This is book two in the Game of Thrones series.  At this point, King Joffrey is the ruler of the Seven Kingdoms.  Because he is still a boy, his mother remains Queen Regent.  Joffrey remains cruel and is holding Sansa hostage at King's Landing.  Now that Sansa's traitor father is dead, Joffrey and his mother refuse to let her go home.  Sansa's sister, Arya is posing as an orphan boy and trying to get back to Winterfell.  Sansa's brother, Robb - King of the North - is battling to rein the seven kingdoms.  Danerys is trying to get to Kings Landing so she can become the rightful Queen of the seven kingdoms.

This book was as good as the first.  RR. Martin is a very talented writer.  There are 1000 characters, and you sometimes get a little lost on who belongs to you, but it doesn't distract from the story.  Even though he writes about a fictional world, he doesn't make up words just to make them up.  He makes those 1000 pages fly by.

I enjoyed this book and look forward to reading the next.  If you haven't tried this series yet, I highly recommend it.

Stars: 5
Posted by PletcherFamily at 3:42 PM No comments: