2021 Challenge: Watch Out For Dragons: The Hobbit 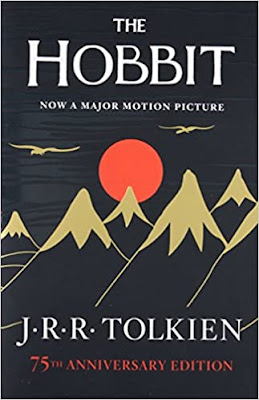 This is my 43rd read of the year
This prelude to Lord of the Rings is the story of Bilbo Baggins - a Hobbit that is enjoying the quiet life.  One day Gandalf the wizard and his company show up at his door and together they go on a quest to raid the treasure of Smaug the dragon.  Bilbo reluctantly agrees and has no idea what is in store for him.
I have to admit that I have not read Lord of the Rings AND I was unaware that The Hobbit was a children's book.  Once I realized that part, the book made more sense to me.  It is written simply.  It was a good an enjoyable story, but I didn't really get into it.  I found my mind wandering, and it just wasn't for me.  However - I am thinking that kids would enjoy it.   I wonder if I had read this when I was younger I would have something different to say about it.
Stars: 3 1/2

Posted by PletcherFamily at 2:01 AM No comments:

2021 Challenge: Book Written By An Author Who Was Over 65 When Published: Angela's Ashes 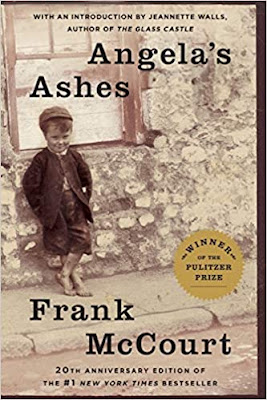 This is my 42nd read for the year
This is the story of the author's childhood.  Starting from his short time as a small child in America, and then his middle and teenage years in Ireland.  One tragedy after another befalls his family.  He grows up extrememly poor in Ireland with many siblings and an absentee father.  They barely have enough money to feed themselves and cloth themselves and the ups and downs he and his family experienced are astounding.  His drem is to save enough money and move to America.  Frank weaves a story of how he and his family barely survived a father who barely worked and drank his wages away, and how hard it was to just stay alive.
This was a really depressing story.  It is well told, however, and that helped.  I could picture where he grew up - down to the smell and desparation.  It is a raw, heartbreaking story and makes me thankful for the childhood I had. I know I am late to the game reading this one, and I have never seen the movie.  I am glad I finally pulled it from my TBR pile.
Stars: 4

Posted by PletcherFamily at 2:36 AM No comments: 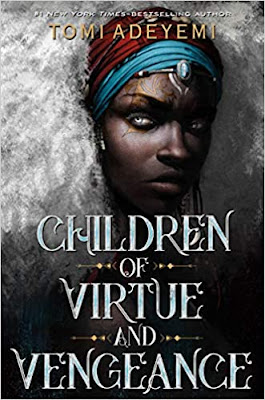 This is my 41st read for the year
This is the 2nd book in the Legacy of Orisha Series.  Amari and Zelie have brought magic back, but the magic not only returned to the Maji, but to nobles who had magic anestry.  No the enemy is just as powerful as the Maji and Zelie must unite with all the Maji she can find to keep control of Orisha.  Amari remains torn between protecting the Maji and protecting her brother.  Her choices make it hard for Zelie to trust her and keep the Maji safe.
This was an okay book.  Not as good as the first.  It is entertaining and a good audio book while doing yard work. Inin - Amari's brother - wavered so often in the book that it got tiring.  Pick a side man.  The angst in this book (hey they are teenagers after all) was a bit much for this adult reader.  It just went on and on to the point of "move on already".
I understand there is going to be a third book - this book does leave open ended.  I may check it out hoping that the story will move forward and evolve beyond teenage woes.
Stars: 3
Posted by PletcherFamily at 5:28 PM No comments:

2021 Challenge - An Author of Color: Children of Blood and Bone

Book: Children of Blood and Bone 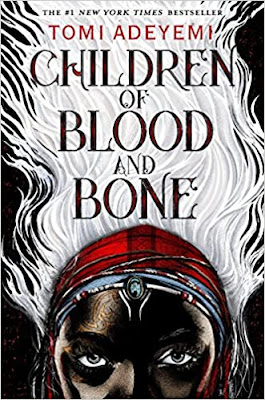 This is my 40th read for the year
This is the story of Zelie and her people.  She remembers a time where magic ran through the Deviners and Maji.  However, a tyrant king made sure that magic disappeared forever leaving Maji dead.  Zelie's mom - who was a powerful Reaper - was taken away in chains and killed shattering their family.
Now Zelie is on a path to bring magic back.  With the help of her brother and some unlikely allies in the kingdom, she has one chance and one moon cycle to return magic to her people and rid the kingdom of their tyrant king.
This was a pretty good book.  I listened to it while I did yard work (it si 15+ hours) and the reader was excellent.  I got invested in the story and its underlying message.  It started a little slow and confusing for me, but as I started to invest in the characters it got better.  The chapters move between 4 differend POV which I have always been a fan of.   I like hearing from different people throughout a story - see how they view what is happening around them.  It is a story of heros, good vs evil, and how everything isn't always as clear cut as it seems.
This has been a popular book out there forever, and I kept passing it over, but I am glad I finally read it.  And I am definitely going to read the second book in the series.
Stars:4

Posted by PletcherFamily at 2:58 PM No comments:

2021 Challenge: A Book With A Deckeled Edge: The Prisoner Of Heaven

Book: The Prisoner Of Heaven 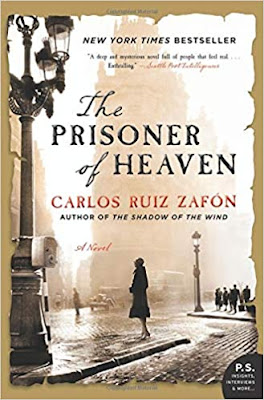 This is my 39th book of the year
This is the 3rd book in the 4 book series "The Cemetery of the Forgotten"
Daniel returns in this book - our hero from Shadow of the Wind - as a grown man who is married with a baby.  He is running the bookshop with his dad and a family friend named Fermin.  A stranger visits the bookshop one day, buys the most expensive book in the shop and tells Daniel to give it to Fermin along with a mysterious note.  This leads Fermin to tell Daniel about his past and how it intertwines with Daniel's mother, Isabella, and David Martin - whose story was the last book.  This books starts to weave all these lives together and leaves Daniel wondering who he really is.
This was a good book.  Well written, as I expect from Zafon.  I liked it much better than the last book.  I was very invested in the story of Fermin and how it intertwined with DAniel's story from Shadow of the Wind and David Martin's story from The Angel Game.  I am anxious to read the 4th book to see if it ties up nicely in the end.
Stars: 4 1/2
Posted by PletcherFamily at 1:56 AM No comments: 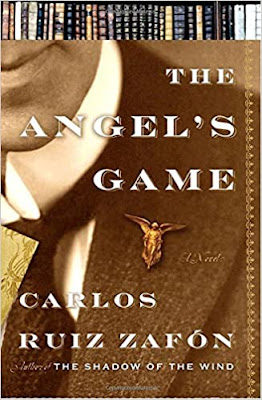 Posted by PletcherFamily at 2:33 AM No comments: