Book #2 in the Pines Triology!

This book was called Wayward 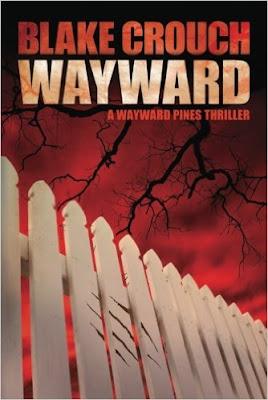 Two weeks have passed since Ethan has arrived in the strange town of Wayward Pines.  He has found out that there are only 461 people that live in the town, he has found out the truth of the fence, and the town, and he has found his ex-partner.  He has also been made sheriff.   None of the residents know how they got there.  As Ethan starts to talk to them, most of them were in some kind of accident and ended up where they are.  They are told where to work, how to live, how to marry.  Some think they are dead.  Some think they are part of an experiment.  But Ethan knows the truth and what lays beyond the fence of the town is terrifying and worth staying where they are.

Again - I know, vague.  But I don't want to give it away.  It is more fun to figure it out yourself.   This book was kind of like the TV show, but mostly went its own direction.  It wasn't a bad direction at all, though.  The TV show just chose a different direction and chose to feature different characters.  I enjoyed this book as much as the first.  It is an easy read, so I say continue to book three!