They keep on coming! - Thirteen Reasons Why

These last two books I read were two fast ones.

The book I am reviewing today is called Thirteen Reason's Why 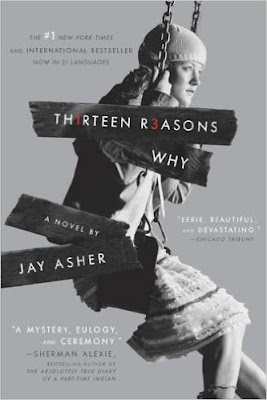 This book is about a high school girl who commits suicide.  The whole town is reeling with why it happened.  One day, our main character receives a package at his door - inside are cassette tapes.  He doesn't know who they are from or what they are doing at his house, but he finds an old tape player and begins to listen.  He quickly realizes they are from the dead girl.  She wants to take an opportunity to explain what lead her to her decision to kill herself and the 13 people who were involved with that decision.  Each person on the tapes is to receive them at some point, and then pass them on to the next person.

Our main character, Clay, is a good guy.  He takes the time to listen to the tapes and follow her path to what lead her to commit suicide.  And in the end, he passes the tapes on to the next person who is to receive them hopefully to help everyone heal.

This was an easy read.  It was definitely a young adult novel, and a good read for those in high school.  It talks about the signs of suicide and how one thing that happens to lead to many more, and for young people, it should not be taken lightly.  She made connections to everyone on her list and why she made her decision.  It was a little sappy, but again, it was YA.  If you are looking for something that talks about a very serious topic but does it in an easy read, then this book is for you.

Posted by PletcherFamily at 2:00 AM