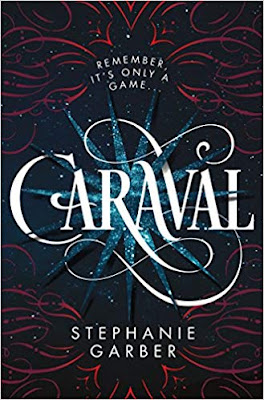 This is my 84th read for the year.

This is the story of Scarlett and her sister Tella.  They have never left their tiny island where they live with their father.  Their father is cruel, and the girls would do anything to escape.

Scarlett's whole life, she has dreamed of going to Caraval.  It is a once a year show where the audience particiaptes, and it is on an island that is not her own.  Now Scarlett is grown up, and about to enter an arranged marriage to a man she has never met.  She feels she will never have a chance to see Caraval now.

By chance, an invitation to Caraval arrives for Scarlett and her sister.  A stranger - a sailor - agrees to take them there, if he can have the third ticket that arrived with Scarlett's letter (the ticket is for Scarlett's fiance).  Scarlett agrees, and she and Tella take off without telling their father where they are going.  When they arrive on the Caraval island, Tella is kidnapped by Legend - the leader or Caraval.  It is quickly revealed that finding Tella - by anyone playing the game - will be the winner of this year's event.  And the winner gets...a wish.

Scarlett has only a few days to find her sister, and get back to her island so she can be married.  She is told that the game is just that - just an illusion and nothing is real.  But Scarlett quickly finds that this isn't always true.  She is quickly wrapped up in the heartbreak and magic that is Caraval as she races to find her sister.

I thought this book was fine.  I got swept up in the bookstagram talk about Caraval, and wanted to see what the hype was about.  I should have left it alone.  The book wasn't terrible, but it wasn't great.  Again - this is just my opinion, but I just didn't like it.  If you are thinking that this is like The Night Circus - it is not.  This book had a lot that just wasn't well developed.  You don't really like any of the characters.  Scarlett talks about how Tella is her one reason for living, yet you barely get a back story on the two of them.  Nothing that would make you think their bond is amazing.  Tella is barely in the book.  The male characters make very little sense, and their plot lines are all over the place.  The love triangle is silly.  And Caraval itself?  You learn so little about the actual game, and you don't get a good picture in your head of what it even looks like.  Scarlett spends as much time in the hotel in her room as anywhere else.

Sigh.  Ah well. It is a really easy read.  If you are looking for true fluff with very little depth, then this book will be for you.  I had originally put that I will be reading the second book this summer, but I will not.  I am glad I only borrowed it from the library and didn't buy it.