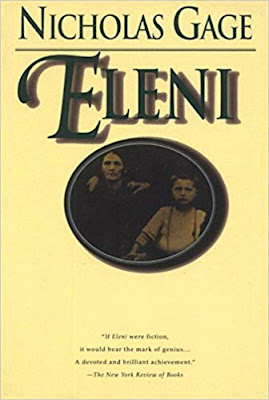 This is my 7th read for the year

My husband has been to Greece for business since we moved to Switzerland, but I have not gotten there yet.  It remains on my short list of places to visit.

This is the author's own story of his mother, Eleni, and their family in the Greece civil war.  In 1948 Nicolas and his family were trying to escape the war.  Eleni defied her village and arranged for her and her children to escape to America, where her husband was waiting for her.  Eleni was able to get 4 or her 5 children out with a friend and neighbor before she was sent to work detail.  While there, she was able to help her 5th child to escape before Eleni was tortured, imprisononed and eventually killed.

Eleni lived her whole life in this small village in Greece, met and married a man who had a business in America, and raised her children basically on her own in Greece.  She kept promising to join her husband in America, but then the Civil War happened, and she was cut off from him for 2 years.  He could not get to her or get them out, and by the time it was over, Eleni was dead.  Nicolas immigrated with his sisters to America when he was 9 years old, and grew up to be a New York Times Reporter.  He was determined to find out what happened to his mother and face the people who executed her, so he went back to Greece to find out the whole truth.

This was an amazing book.  It is very small print and a very long book, but it is so captivating, you won't want to put it down.  It traces Eleni's life and the Civil war - taking place almost exclusively in Greece.  Nicolas starts the book with how he decided to take on his mission for the truth, and then ends it with his return to Greece and facing the people who were responsible for his mother's death.  Nicolas is an amazing writer, and the story flowed one chapter after the other seemlessly.  The ending of the book is nicely wrapped up with details about his sisters lives, and the lives of those from the war - gives great closure to a story you are going to be very invested in.

Highly recommended book.  I am so glad I found this one.

Posted by PletcherFamily at 11:23 AM