Extra Book - When We Believe In Mermaids

Book: When We Believed In Mermaids 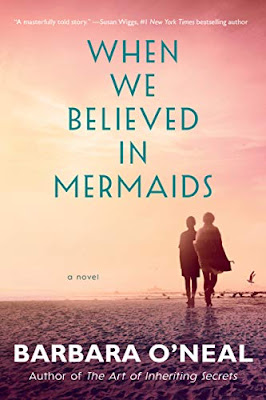 This is my 65th read for the year.
This is the story of Kit and her sister Josie.  The grew up in a home that was filled with turmoil.  Parents who didn't take the time to parent instead spent their time with alcohol and drugs.  And an "brother" who came into their lives when they were teenagers who was left to care for them, but struggled with deamons of his own.
Josie ran away and killed in a terroist attack on her train.  For 15 years Kit and her mother have mourned her.  Already Kit had lost her father in an earthquake and her "brother" Dylan to a drowning.  Focusing instead of keeping herself out of trouble, Kit becomes an ER doctor.  One day, while watching the news of a fire in New Zealand, Kit swears she sees her sister in the background.  Slowing the video she becomes more convinced that Josie is somehow alive and she needs to go and find her.  She gets on a plane to New Zealand to search and find out the truth.
Kit is determined to find her, but in taking this journey she is forced to re-live her past.  Old memories and old wounds resurface and Kit can no longer run away.
This was a pretty good book.  I listened to it as an audiobook on my long car rides and it kept me entertained.  It is an easy listen and the story flows well between the two sisters.  There are a few eye rolling moments for me - things that just seem a bit silly or overdrawn, but for the most part, a good story.  Kit and Josie are likeable characters and it was interesting to see how two sisters from the same house had two very different life outcomes.
I would say check this one out.  As an easy beach (or winter pretty soon) read or a good audio book.
Stars: 4

Posted by PletcherFamily at 12:27 AM