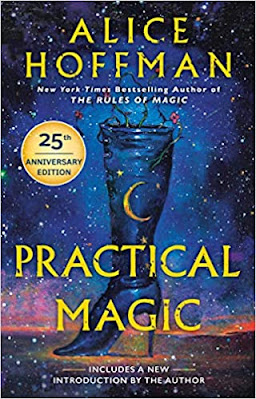 This is my 84th read of the year
This is the story of the Owens family - 200 years after Maria Owens lands in Massachusetts.  The family of witches is always blamed for all the bad things that happen in their area.  Sally and Jillian Owens have their own set of problems.  Sally falls in love and marries a wonderful man and has two beautiful children.  Jillian falls for a man that is awful.  In the end, both men's lives end as goes the fate of the Owen's family when it comes to love.  The sisters have a secret that they are trying to protect, but it soons catches up with them.  Jillian and Sally will do anything to protect their family.  So they call on their elderly aunts to help.  Their family bond cannot be broken no matter what the cost.
This was an okay book.  It is the 3rd book in the series.  I have read Rules of Magic and Magic Lessons recently, so had to finish the series with this one.  The other two had much more depth and character development with this one.  I listened to this one as an Audiobook and it was only 3 1/2 hours long.  So short that I never really developed feelings for any of the characters or really saw a development of the actual story.  It was fine - just not as good as the other two.  I know it was actually the first book she wrote and other other two, though prequels, were more recent.  However, I was just hoping for more.
I have never seen the movie and I have read that this is pretty different.  I might check it out anyway just because.
Stars: 3
Posted by PletcherFamily at 6:09 PM