Book: Leap Of Faith - Memoirs Of An Unexpected Life 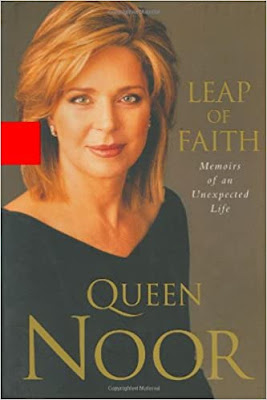 This is my 85th read of the year

This is the story of the author and how she became the Queen of Jordan, and her work in that role.  Born in America, as Lisa Halaby, Queen Noor was a Princeton graduate who quickly found herself in love with King Hussein after a chance meeting 2 years after she graduated.  He was recently widowed, and after a whirlwind romance they were married.  They had 4 children together, and the book covers her time as Queen and the work that she and King Hussein did to bring peace to Jordan and the countries around them.  King Hussein died of cancer in 1999 and Queen Noor continued her work for Jordan long after.
This was a very well written book.  I am always intrigued by stories coming from this part of the world because I know so little about it.  It is always interesting to hear personal stories and read their point of view.  Queen Noor gives a personal account of her time as Queen and also the unrest that took place during her rein from the 1970s through the late 1990s and how she and King Hussein fought to settle that unrest.  She was very involved with the political aspects of her country.  You can tell from her writing how much she loved her husband, her adopted country, and her life as a leader in Jordan.
Worth the read.
Stars: 4 1/2

Posted by PletcherFamily at 5:48 PM