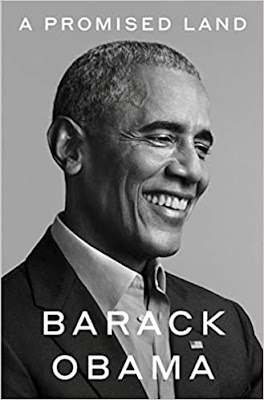 This is my 107th read for the year
This is Obama's first half of his autobiography.  It covers the time before he was in office, but mostly covers his first 4 years as president- leading up to when Osama Bin Laden was killed.  Deeply covering the ins and outs of the presidency, the people he met, the challenges he faced, he shares what it was like to be the first African America President of the United States.
I loved this book.  I did listen to it as an audiobook, and 21 hours of listening filled my hours of driving kids around, driving back and forth to work, and painting our house.  He gets into the nitty gritty of the presidency, so some parts were a little dry.  For the most part, I found it extremely interesting.  He talks about the relationship with his mother and grandmother, his wife and his daughters.  He talks about what it is like to be Black in America.  But above all, he covers the challenges that a world leader faces when he is put in charge.  He is candid about mistakes he made and things he wished he could change.  But above all, you can tell he was proud of his presidency and the job.
I encourage you to check out this book.  If you are interested in the audio version, it is President Obama who reads it, and I cannot tell you how nice it was to hear his voice again.  How we have missed his leadership these last 4 years.
Stars: 4 1/2

Posted by PletcherFamily at 1:02 AM