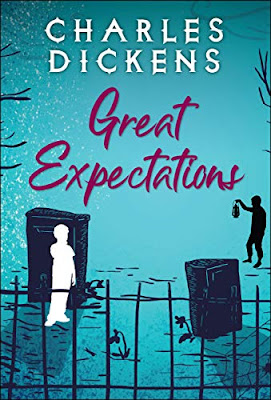 This is my 50th read for the year
This is the story of Pip.  He is an orphan who is being raised by his sister and his sister's husband, Joe.  He meets a convict on Chrismts Eve when visiting his parent's graves.  The convict talks Pip into stealing some tools from Joe so that the convict can remove his chains.  Pip also steals him some food.  On Christmas day, police visit Pip's home and ask Joe to help them mend broken irons they found from the escape convict and Joe and Pip help with the recapture.
Year's pass and Pip meets a Miss Havisham a wealthy spinster that was in need of company.  Here he meets and falls in love with Miss Havisham's adopted daughter, Estella.  He continues to visit Miss Havisham and Estella until he is old enough to become Joe's apprentice.  4 years pass as Pip learns his trade when a lawyer approaches him and tells him that he has come into a large sum of money from an anonymous benefactor so that he may become a gentleman.  Years pass while Pip lives and works and spends money in London and at age 23 he finds out who his benefactor is - much to his surprise.  Spending time with his benefactor his learns his true identity and learns more about Estella's past and her family.
In the end, Pip leaves London, goes to work in Egypt and returns 11 years late to find Joe married with a child and asks Joe for his forgiveness for abandoning him and their relationship all those years before.  Pip hopes to settle down, repay his debts, and find Estella bringing his story full circle.
This was a great book.  I love Charles Dickens and actually visited his home (which is now a museum) in London and that was incredible.  I even went on a Christmas Dickens tour on year with my family where we learned so much about Dickens, his stories and his life.  He is an incredible writer, and I have always enjoyed his work.  This book was no exception.  I loved it from the start and was very invested in Pip's story and what would happen to him once he came into so much money.  His story takes some unique turns with some suprises and held me capitvated until the last page.
I highly encourage you to read this one.  You will not be disappointed.
Stars: 5

Posted by PletcherFamily at 1:39 AM