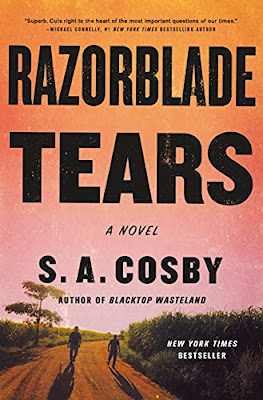 This is my 13th read for the year
This is the story of Ike and Buddy Lee.  Both men have done hard time for crimes in their past.  Ike has been clean for 15 years, owns his own business and has a family.  Buddy Lee is also out of prison, but hasn't had an easy time.  When the cops show up at Ike and Buddy Lee's doors to say their sons have been murdered, the men know they need to make this right.  Neither father were good to their boys while they were alive so now they feel they own them redemption.  They set out to find out who killed their sons, however that going to come at a heavy price.
This was a pretty good book.  It is well written and the story moves fast.  Once I got into the story, I wanted to finish it to see where it was going.  There are a lot of characters and a lot of of POV throughout the book which can make for a tough read.  The two sons who were killed were not really brought to life in this book, which was probably intentional, but left me wanting more.  I wanted to feel the father's pain by knowing more about their boys and their lives.  HOWEVER - based on how these fathers were to these boys, that may be why we didn't learn much.  Alao a disclaimer-this book is very very violent.  The story is about two men who did hard time and outside gangs who killed their sons, so it falls suit- but just be warned.
Interesting story.  Glad I read this popular book.  I will be anxious to see if they turn it into a movie.
Stars: 4

Posted by PletcherFamily at 7:12 PM