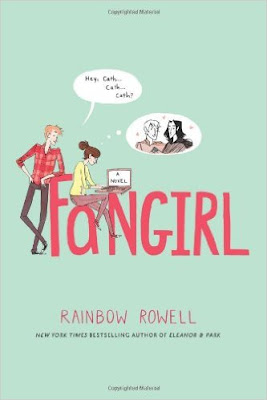 This book is under the category:  A Book That Takes Place in a College/University Setting

This book is about a set of twins named Cath and Wren.  They are going off to college for the first time.  Wren - a free spirit who wants independence, tells Cath she doesn't want to be roomates at college.  Cath, who is an introvert who writes fanfiction about characters in her favorite book, is now completely on her own and terrified.  She ends up with a roommate she isn't sure likes her and her boyfriend that is always around.  She is taking a junior level Fiction Writing class with a professor that hates fanfiction.  And she hasn't made any friends.  She spends most of her time worrying about her dad who has been alone since their mom left when Cath and Wren were 8, and he has a diagnosed bipolar disorder.  Cath is not sure she can survive without her sister by her side and not even sure she wants to.

The book is pretty fun.  I read Eleanor and Park - another one of Rainbow's books - last year, and really enjoyed it.  This book did not disappoint.  Yes, it is a YA novel.  I read quite a few of those actually.  Mostly because they are easy reads, but also because a lot of Arlington (my almost 13 year old daughter) has friends that read these books, and I want to see if they are appropriate for her age group.  This one I would say is/isn't.  I am not really ready for her to read books with so much language in them.  (although, she would tell you she hears it each day on the bus).  But other than that - it is PG-13 material.

Cath - the the main character - makes you want to punch her in the face.  Just a little bit.  She is witty, but she is also a total hermit.  She doesn't smile much, she doesn't socialize, she barely talks.  She is stuck in a fanfiction world of a book series that would be like Harry Potter in her world.  She wants to be a writer, but she only wants to be a fanfiction writer because it is easier than coming up with her own ideas.  She chooses not to do a project for her Fiction Writing class because she just doesn't feel like it.  Seems a bit......immature.  She is 18, but I don't know.  I would be horrified if I didn't do a project in college - would never have thought about never turning it in at least.

There is a love story.  And it is a pretty great one.  The boy she falls for is a great guy, and you are rooting for him the entire time she is deciding how she feels about him.  And there is family struggle.  These girls have a lot of deep seeded issues since their mom left, and they start to surface in full force now that they are alone in college and trying to figure things out without the other twin to lean on.

I recommend the book.  It had some really funny lines, and it was a pretty easy read.  Check it out.

Posted by PletcherFamily at 2:01 AM