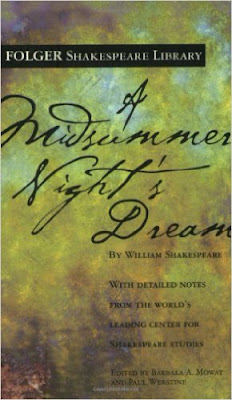 This was under the category:  A Play By Shakespeare

This is the story of several people.  In Athens - Egeus wants his daughter Hermia to marry Demetrius.  Or become a nun.  Those are her only two choices.  But Hermia is in love with another - names Lysander - and makes plans with him to run away and get married away from Athens.  In the meantime - Helena is in love with Demetrius, but he not with her.  Demetrius loves Hermia.  Helena finds out about Hermia and Lysander's plans, and tells Demetrius.

In the end - all is righted with the couples, and the silliness ends

I am sure most people in the world have read Shakespeare at some point in their lives.  This is a comedy, and one of my favorites.  I have read this play many years ago (I have read them all, so a re-read was my only choice for this category).  But I read it only in Shakesperian, and I found a novel that translated it into modern English.  That made it much more enjoyable, and I had forgotten a lot about the play, so it helped.

This play has one of my favorite lines, and it hangs in my daughter's room here at our house:  "Though she may be but little, she is fierce".  My youngest is a teeny thing, so it fits her perfectly.

I enjoyed this book.  Shakespeare plays are tough reads.  Especially if you don't have some notes, or an easier version to read.  Well.....at least for me.  But I recommend this one because no one died - which is a nice change.