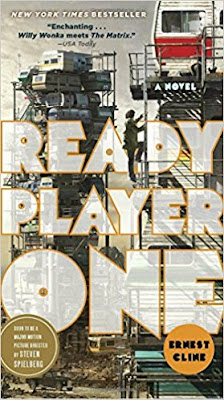 This was under the category: A Book That is Becoming a Movie This Year

This is the dystopian future story that takes place in the year 2044.  The world is in terrible shape.  Most people are very very poor and live in "stacks" which are mobile homes one on top of the other.  The main character - Wade - doesn't live with his parents.  He was taken in by an aunt after his parents left him.  The aunt could care less about him - sees him as just another mouth to feed.  To escape his reality, Wade does what most people do these days - escape into a computer world called the Oasis.  He even attends school there.  This world has 1000s of planets and lets people be anonymous and anyone they wish to be.

When the developer of the Oasis dies, he leaves his entire fortune to a winner of a game he has designed.  The first person to finish the game in the Oasis, wins billions of dollars.  The trick is - the developer was fascinated with the 1980s, so the player has to be knowledgeable of everything and anything in that decade.  It takes 5 years for someone to finally break through the first clue of the puzzle the developer has set up, and then it is a race to the finish line.

This was a pretty decent book.  My husband really liked it, so he encouraged me to read it.  AND, since it is being made into a movie, I decided to give it a shot.  I like the idea of the book, and I liked the characters.  The flaw I found was - everything works out for Wade.  His character in the Oasis always escapes problems, gets enough money, becomes invincible.  There really wasn't a challenge, per say, for Wade because he could do anything he wanted inside the Oasis.  It just seemed to be a bit of a far stretch.  Other than that - good read.  If you are a fan of the 1980s, I say you should give it a try.