Today's review is for a little book called

The 500 Years of Resistance 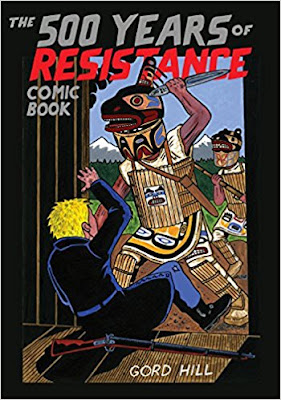 This was under the category:  A Book About an Indigenous Culture

This book was about the Indigenous people's resistance to the Europeans coming to America.  It covers the time from Christopher Columbus to the year 2006.  It is a graphic novel depicting the Native Americans fighting back against the white settlers who took their land.

Not much to say about this short 80 page graphic novel.  The author - who is Native American - glosses over 500 years of Indigenous people history.  He moved so fast from one event to the other, it was hard to make sense of the book.  I think if he would have broken it up into several graphic novels, it would have held more weight for me.  I didn't get much out of it, or learn much about the history he was trying to depict, because there just wasn't enough detail.