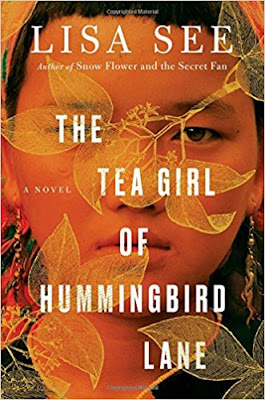 This story follows a girl named Li-yan as she grows up in the remote village of an Akha tribe in China.  She grows with superstitions that she is told will change her fate in life, but to outsiders would seem beyond extreme.  (killing a set of newborn twins because that is the highest form of evil).  The women of this village are known for picking tea leaves and making tea cakes.  This village has no running water, and no electricity.  Li-yan has never even seen a car let alone modern conveniences that were available in the 1980s.

As Li-yan grows, a turn of fate sets her on a course she never expected to be on.  She leaves her village and is introduced to the business of selling tea from her remote village.  These teas are so valuable that they go for several 1000s of dollars when they sell.  Li-yan starts to make money to send back to her village, and meets a man that will change everything for her.

The second narrator of this book is a child named Haley.  Haley is a Chinese girl who was adopted as a baby from an orphange in China.  She is growing up in America in a rich family and has everything she needs.  She becomes interested in tea and its origins in China as she gets into high school and then on to college.  Her path leads her back to the remote villages of China as a college student, and there she meets people that can help her reconnect with her unknown past.

I have mixed feelings about this book.  While parts of it were very good, and I was very involved with the story (Especially Li-yan and her village and their ways), some parts fell flat.  Haley's parts were not that interesting, and then there were parts of the book that just were way too detailed about tea.  IT read more like a text book in those sections, than a novel, and I found myself skimming quite a bit.  I did not find that it helped the story along at all.  I was invested in the novel for the story about the people - not the tea.

And the ending - for the love.  I will tell you now that it was a lot of build up for a lot of let down.  You hit a wall - the last sentence.  Really?  This is where you want to end this book?  It was frustrating to say the least.

I am a mother of an adopted little boy from China.  He came home to us at the age of 14 months.  IT has been 11 years since that happened, and we don't go a day where we aren't grateful to his birth mother for her sacrifice.    This book does talk a good bit from the point of view of a birth mother who always wonders about her child, and from the adopted child's point of view.  It did feel like, sometimes - not much - that the author felt that adoptive parents collect these children as something to show off and mold to be the "ultimate Asian child".  I can tell you from my point of view -that isn't how it is.  At least not for us.  Could be because we have a boy, but our son asks only for legos and food.  End of list. Typical boy.

I am mixed on whether to recommend this book.  I would say yes overall - give it a try.  But it could have been better.