The Boy In The Striped Pajamas
Author: John Boyne
Pages: 228 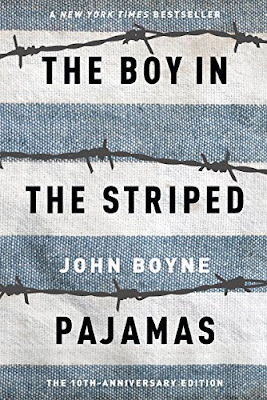 This is the story of a little 9 year old boy named Bruno.  Bruno and his family have just moved to
"Out With" - away from their comfortable home in Berlin.  Bruno is unhappy about the move, but because his father is not a "Commandment" in the Germany army, the family had no choice.  Their new house is smaller than what Bruno and his sister, Gretel, are used to, and there are not many other houses around them.

When Bruno looks out his window, he sees a large fenced in area full of people all wearing Striped Pajamas.  He doesn't know what they are all doing there.  One day he goes for a walk along the border of the fence, and finds a little boy named Shmuel. The two of them start talking and Bruno starts to visit him every day.  Bruno, who doesn't fully understand what the fence is for, and why the little boy cannot come and play, starts to become curious about life inside the camp.  According to Shmuel, there are 100s of little boys in the camp, and Bruno - who has been wishing for playmates - asks Shmuel if he can come inside the fence and play.

This was a great, fast read.  It was well written.  Told from the point of view of a 9 year old boy that does not understand what is happening around him was a unique story telling style.  He thought when his parents were says Auschwitz it was "Out with".  He thought the Fuhrer was "The Fury".  He could not put together what was happening around him - only that he was forced to move and now has a friend behind a fence that he cannot reach.

The ending is catastrophic and I did not see it coming.  I encourage you to read this book, and take on yet another view of the Holocaust.


Posted by PletcherFamily at 4:21 PM