Off Challenge - The Women At Hitler's Table 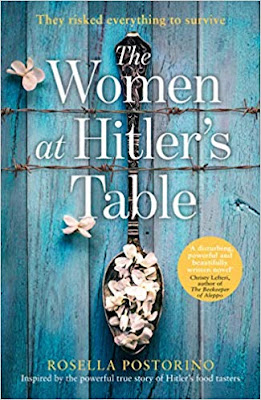 This is my 3rd book of the year

I know - I am off my challenge already!  So early in the year.  But this book had popped up on Instagram and I was drawn to the title and the beautiful cover, so I had to read it as soon as it arrived.

This is a historical fiction novel based on the real life of Margo Wolk who was a food taster for Hitler during the war.  The book tells the story of 10 women in East Prussia who were pulled from their homes during World War II and forced to taste Hitler's food before it was served to him.  For more than a year, three meals a day, the women sat under armed guard in a room and were forced to eat food they didn't know was poisoned or not.  The main chracter - Rosa - has lost her parents, and her husband is presumed dead on the front.  She lives with her in-laws whose lives would also be in danger if Rosa refused to be a food taster.

During Rosa's time as a taster, she befriends the other women.  All have their own terrible stories and fears which brings them closer together.  None of them know how or when this will end and their only instinct is to survive and return to their families.

This was a good book.  I stayed up late into the night reading chapter after chapter, wanting to see how it would end.  I did enjoy the book overall and it was beautifully written.   The ending was a little unraveled, as most endings are, but not bad.  I am glad I found this one, and I recommend giving it a read.