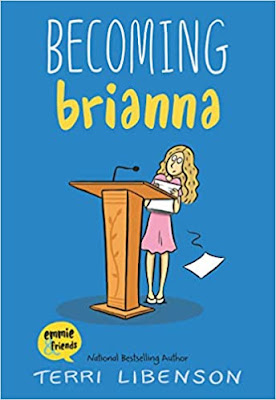 This is my 83rd read for the year
In this graphic novel by Libenson, Brianna has decided to have a bat mitzvah.  At first she is doing it because her mom wanted her too, but she soon discovers she wants to do it for herself as well.  However, Brianna has terrible stage freight, and is struggling to learn the Hebrew language.  She doesn't feel that she will ever be ready.  At the same time, the whole school has gotten the idea that Brianna is having a huge Bat Mitzvah party with celebrities and musical guest, and she doesn't know how that started.  As she struggles with being ready for the Bat Mitzvah, and friendships, she starts to think none of this was worth it.
What a cute book.  Finley and I have read all of Terri Lbenson's books, and they never disappoint.  And they usually have a surprise ending that is quite clever.  I have to say for this one - the ending wasn't nearly as clever as past books, but cute none the same.  An overall great story and great read.  I recommend this one for your middle schoolers or late elementary kids.
Stars: 4

Posted by PletcherFamily at 5:59 PM