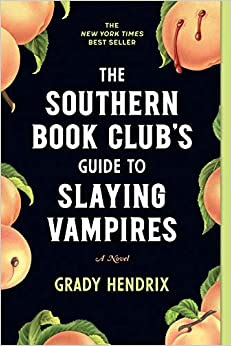 This is my 88th read for the year
This book is about a group of women who are in a bookclub in a well to do neighborhood in Charleston.  They form a club that reads horror novels.  One night one of the members, Patricia is attacked by a neighbor and a man named James Harris enters her life because of it.  The group is immediately charmed by him and his business prospects, but when children start disappearing in a poor section of town, Patricia starts to become suspicious of James.  No one else in her group of friends or neighbors believe that James has anything to do with the missing children.  Patricia sets out to prove she is right and it leads her down a path she never expected.
This book was dumb.  I doln't have another word for it.  I will say this - it started out interesting.  It was written as satire, but it quickly turned into just a blah novel.  It takes place in the 1990s, but the husbands treating the wives like second class citizens got old quick.  None of the characters are likable.  The book jumps half way through 3 years into the future and I thought this might be the chance for redemption, but it was not.  It is sexist and racist and just plain boring.
Skip it
Stars: 2

Posted by PletcherFamily at 2:48 AM