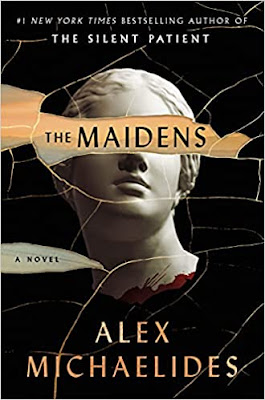 This is my 93rd read for the year
This is the story of recently widowed Mariana.  She gets a call from her niece stating that one of her friends is missing and presumed dead.  Mariana drives to the college to comfort her niece and gets tangled in the search for the murderer.  She pinpoints a beloved professor who has formed a group called "The Maidens" as the most likely suspect.  Thus starts a whirlwind mystery to find out who is murdering girls on campus and why.
I wanted to like this book. I had started to read it, and couldn't get into it, so decided to listen to it instead.  I liked The Silent Patient, so was hopeful. But this story just wasn't good.  I rolled my eyes quite a bit through this one, quickly figured out who the murderer was, and was annoyed with just about every character in the book.  It didn't have a solid plot.  I found myself saying "why" quite often.  The story is disjointed and just a slog.  Listening to it while I did yard work was the only reason I actually finished this one.
Stars: 2

Posted by PletcherFamily at 12:56 AM