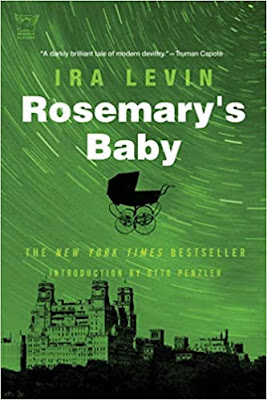 This is my 10th read for the year
This is the story of Rosemary and her husband Guy.  They find an apartment they have to have in the Bramford in New York City.  There are tales of this building having a troubled past, but Rosemary refuses to believe the rumors.  She and her husband, a struggling actor, befriend their elderly neighbors Roman and Minnie, and when Rosemary falls pregnant, they take her under their wing and get her the best care.  Guy becomes even closer friends with Minnie and Roman and Rosemary begins to grow suspicious.  She has pains she knows she shouldn't, she is being forced to drink something every day that she is sure is making her sick, and odd things start to happen to her and Guy's friends.  She is sure there is something wrong with her baby and that Roman and Minnie and their friends are probably behind it.  She will do everything she can to protect her child.
This was a weird book.  It is pretty short, but you still figure out what is happening - even if you knew nothing about this book before reading it.  Guy is awful.  The ending was really out there and almost ended on a cliff hanger.  It wrapped up so quickly after so much build up that it left me wanting more.  Was it scary?  No.  A little eerie? Yes.
Just strange.  Not sorry I read it, but strange none the less.
Stars: 3

Posted by PletcherFamily at 2:17 AM