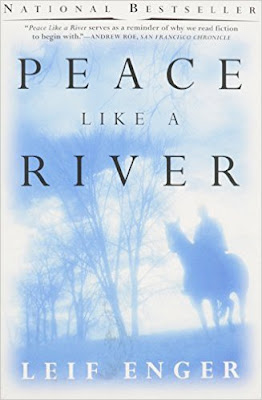 This was under the category: A Book With a Simile in the Title

This book is about the Land family.  It is told by the middle child, Reuben, who grew up in North Dakota as a son of a poor janitor.  He didn't have a mother - she left when he was very little.  His brother flees when he is charged with murder, and Reuben, his sister, and his dad set out to look for him.  Their journey takes an unexpected path and leads them somewhere they didn't expect to be.

This book talked a lot about miracles performed by man through the love of God.  While I was a little worried (well....worried isn't the right word) that it might be a novel strictly about religion and God's miracles, it wasn't.  It was the story of this family whose father seemed to perform miracles because he loved God and prayed hard.  It is how his 11 year old boy, Reuben, viewed him.  A pot of soup that never seemed to empty.  A person changed because his dad simply touched him on the cheek.

What it comes down to is the kindness that this man showed to those around him.  Reuben's father was a calm, polite, giving man, and to an 11 year old boy, the reactions that happened because of these actions definitely changed the people around him.  When Reuben's older brother kills two boys in self defense, and runs from the law, Reuben and his family head out to search for him.  Who they find instead is Roxanna - a beautiful woman - both inside and out - that takes them in during a blizzard and treats them like family.  They finally feel like they are home when they are with her.

Do they find his brother?  You will have to read to find out.  I will tell you that there is tragedy in the book - beyond the initial shootings.  But in the end of the book, we get to see Reuben as an adult (he is telling the story as if it is in his past) and what his life has become because of what happened the year he was 11.

I would say give it a try.  Like I said - I was a little wary of it at first because of the direction I thought it would take.  I think it was because I wasn't expecting it.  But it was good.  And it ended well.