Today's book I am going to review is called 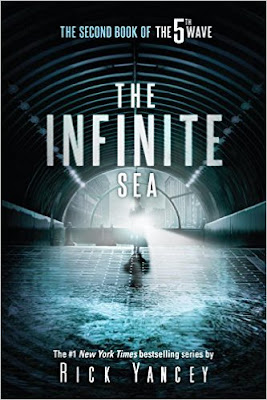 This was under the category:  Dystopian or Post-Apocalyptic Novel

This is the second book in a trilogy. (The 5th Wave)  It picks up where the first left off (obviously) - 7 billion people on earth are dead, and the aliens who invaded have started the 5th Wave.  Surviving the first 4 was tough enough, but the humans that remain (who are mostly children/teenagers) are fighting back.  The aliens are not done fighting to exterminate the whole human race, and the humans are not willing to give up yet.

I was thrilled to be able to find a category that the second book of this series fit into.  (the third does not come out until May).  I really enjoyed the 5th wave, and made it my first book I read this year (so you can check it out here on the blog).  The aliens have been watching the humans for 10,000 years before they attack.  They have killed off 7 billion people with plaque, coastal destruction, and general killings, and now they aliens are killing off the last of the small pockets of people that are left.  Which are mostly children.  I did enjoy that this book told us more about the other characters that came into play in the first book - developing them a little more.  But there was definitely not enough story line with our two main characters - Evan and Cassie.  Cassie was the heroine in the first book, and we wanted to see that continue.  We do - but not as much as I would have liked.  They developed another female character and spent many chapters with her and her story - more than was necessary in my opinion.

But - the book was still enjoyable.  And not a long book.  I am looking forward to what the third, and final, book will bring.