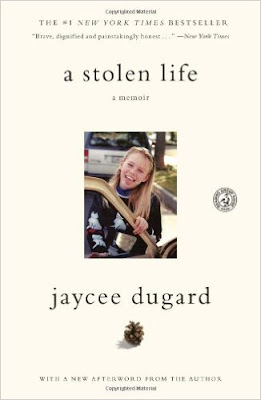 This was under the category:  A Book Based on True Events

This book is written by Jaycee Duggard who was abducted at the age of 11, and forced to live in captivity for 18 years before she was rescued.  She was forced to change her name, she had two children by her abductor.  She was sexually and mentally abused, and in 2009 she was rescued.

This story was hard to read.  Not because it was poorly written, but because of what happened to Jaycee.  What she was made to endure for 18 years with no way to escape is unimaginable.  At age 14 she had her first child.  And at age 17, her second.  Both due to being forced to have sex with her abductor.  I have a 13 year old daughter, and I cannot imagine her being in this situation without getting sick to my stomach.

The fact that she survived at all, is utterly amazing.  And since her release she has worked hard to keep her daughter's faces and names out of the press (they are not even named in this book).  She wants their lives to be normal.  She was 11 when she was abducted, and 29 when she was released.  Her daughters were 15 and 12 - they also having to endure being held in captivity for most of their lives.

It is a good book.  It is simply written, but that makes it all the better because it is in Jaycee's own words.

Stars: 4
Posted by PletcherFamily at 2:14 AM