It's Kind Of A Funny Story 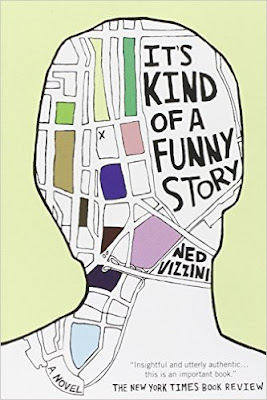 It is under the category: A Book Where The Main Character Has a Mental Illness

This is the story of Craig Gilner who is a teenager in a high profile high school in New York City.  He worked very hard to get into a Pre-Professional High School to keep him on track to get into a good college.

The stress starts to take it's toll, and Craig starts to consider killing himself.  He hasn't been able to sleep or eat well in weeks, and really feels like he is spiraling out of control.  He makes a plan one night that the next day he will kill himself.  But instead, he called the suicide hotline and gets himself to the emergency room a few blocks away.  He is admitted to the hospital's psych ward for an inpatient 5 day stay.  During that stay he learns a lot about himself, his friends, and others with mental illness.

This book was fine.  I understood where it was coming from, and I liked its message.  I liked that the main character decided to seek help and not commit suicide.  And that he was able to pull himself out of his lowest low and start working toward healing.

What I DIDN'T like was how "hunky dory" they made his 5 day stay on a mental ward.  He made friends and fell for a girl.  It seemed to stray from the point of the story.  He was there to heal and get better (a theme his doctors continued to preach throughout the book, yet he ignored).  He was there 5 days and the relationships he developed were as if he was there for years.  They just didn't make sense.  Maybe it was because the main character was a teenager, and this was a teenager mentality - that it wouldn't only take 5 days to latch on to "others like you".  But I think the story was a bit too "happy" to be realistic.  This was a kid who was committing suicide.  Had a lot of problems - from not being able to eat, to not sleeping, to not taking his medication.  No way in 5 days did he basically become 100% better.

Anyway - judge for yourself.  Like I said - the message was there.  It was just hidden under fluff.

Stars: 2
Posted by PletcherFamily at 4:04 AM