Today's review is for Orange Is The New Black 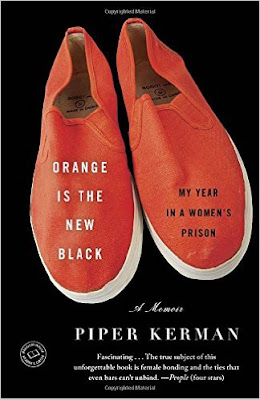 This was under the category:  A Memoir


This is the true story of the author, Piper.  When she was in her early 20's, she decided she needed to live a little before she settled down as a full fledged adult.  Unfortunately, she got into a bad crowd, fell for a bad girl, and ended up doing a little drug money smuggling.  One deal almost went bad, and she decided it was time to get out.

Fast forward 10 years - she has a good job, a loving boyfriend and family and a full life.  All of the sudden, her past catches up to her.  Someone from the drug ring has mentioned her name and the next thing she knows she is sentenced to 15 months in the Danbury, CT jail.  She can hardly believe that she is going to do a  year in jail for something she thought was behind her.

She is thrown into prison with women from all walks of life who actually surprise her by being mostly generous and forth coming about what prison life is like.  Piper gets used to the routines and even makes friends.  She does 13 months of her 15 month sentence before she is let off for good behavior and rejoins society.

I really enjoyed this book.  Mat and I are long time fans of the TV show, so I was anxious to read the actual story.  IT was about 1% like the TV show (not shocking), but that was actually a relief.  The TV show is really.....R rated.  And there was a lot of fighting and gangs, etc.  According to the real Piper, none of that really happened.  Most of the women were nice to her, and she never had any trouble.  She did what she needed to do, and she left.

What I enjoyed about the book the most was the way Piper talked about the conditions the prisoners were left to live in.  Yes - I get it.  They are criminals doing time.  It shouldn't be cushy.  But it should be humane.  She talked a lot about how most of the women wanted to get GEDs or college credits, but this particular prison didn't have a good program.  They sent in unqualified people to teach the programs and the women didn't really have the ability to get any kind of degree.  When it was time for them to be released, they weren't given any kind of guidance about applying for a job as a convicted felon, or getting an apartment, etc.  They were basically told to search the internet for their answers.

I think this is a big place our country is failing.  As many as 80% of criminals return to prison because they were not given a chance while in prison to get better or obtain skills to survive in the real world.  Most of them don't have families or support systems, and so the cycle of bad behavior continues and lands them back in prison.  Education and job skills need to be given to these folks while they are behind bars so that they have what they need when they are released.