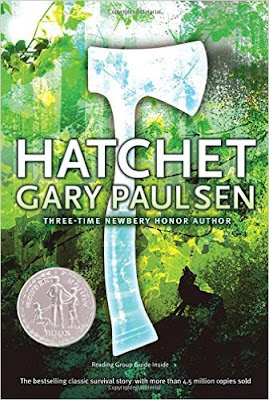 It was under the category: A Book Set In Canada

This is a story of a 13 year old boy who is in a plane on his way to visit his dad.  His parents are recently divorced, and he is going to be spending the summer with his father in the oil fields of Canada.  He is on a small plane where it is just him and the pilot.  During the flight, the pilot has a heart attack and dies and the boy is left to figure out how to land the plane.  The plane runs out of gas, and crashes near a lake somewhere in the woods of Canada.  He has no idea where he is, and the only thing he has is his Hatchet his mother gave him as a going away present.  The plane has sunk in a lake and he is all alone.

He uses what skills he can to survive for 2 months in the woods alone.  He finds food, figures out how to make a spear, a bow and to hunt.  HE fights off wild animals as well as hoards of mosquitos.

When he is finally rescued, he is a changed person.  He was so angry about his parent's divorce, and he had self pity for himself and realized that in survival there is no time for such things.  It took all of his courage just to survive until he was rescued.

This was a pretty good book.  It is a Newberry award winner, and I can see why.  It is a quick read and definitely written for younger readers.  It was written pretty well, and at less than 200 pages, I was able to finish it in less than 2 days.

I would say check it out, so have your kids read it.  It had a good message.

Stars: 4
Posted by PletcherFamily at 8:21 PM