Today I am reviewing the book  Crime and Punishment 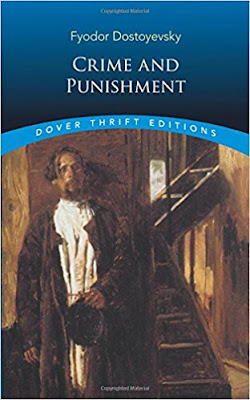 It was under the category:  A Book You Think Looks Boring

This is the story of a man named Raskolinkov a poor student that is caught between good and evil.  He kills a pawn broker because he believes he is above the law.  Guilt finally eats at him and he confesses and goes to jail.  In jail he realizes his mistakes and realizes that suffering is his only means to happiness.

This book was boring.  I was right - I thought it was boring.  It was long and complicated.  I didn't really like any of the characters.  Rodya always seemed dirty and sick, his mother clueless, and his sister just nonchalant about his whole situation.  It was just....blah.  I was glad when it was done.

Stars: 2
Posted by PletcherFamily at 9:26 PM