50!!  Thought I would make this number about 3 months ago, but it is hear at last.

Today I am reviewing:  The Girl With All the Gifts 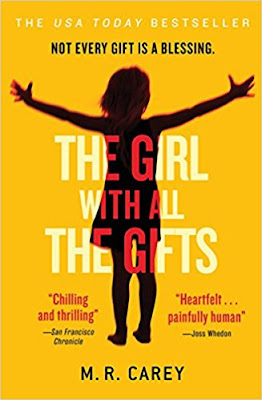 This was under the category:  A Book You Couldn't Fit Into Last Year's Challenge

This is the story in a post-apocolyptic world where there are zombies.  (Or as this book calls them - Hungries).  The story starts when it is 20 years since the outbreak of the virus came that caused people to turn into Hungries.  At this time, if you are bitten by a hungry, you turn into one.  The book opens with a little girl named Melanie.  She is waiting in a cell to be taken to her classroom so she can learn.  Each morning two armed offices strap her head, arms, and legs into a wheelchair and wheel her into a classroom with 20 other kids in the same situation.  They they work on math and reading and hear stories.  What Melanie doesn't know is that she is a Hungry.  These children are in a test facility to find out why they never fully turned into the man eating monsters that live outside the facility.  The director is hoping to learn from these children's brains a cure that can stop the virus.

Instead, the facility gets run over by Hungries and Melanie, her favorite teacher, the scientist, and two armed guards escape.  The guards are not pleased to have a Hungry with them, and they keep Melanie tied up and a mask over her face.  Even though she can learn, she has a hard time resisting the smell of humans.  The group starts a long journey to a facility they believe is still standing and still safe from the Hungries.

This was an okay book.  I read it because I knew it was coming out as a movie and I thought it would be fun to watch.  The book and movie were pretty dumb.  The ending was really stupid.  I think part of it is that we read tons and tons of zombie stories, and they are all basically the same.  The only way this one stood out is that some Zombies didn't actually turn into mindless man eating monsters.  They kept their minds.....but they still craved blood and flesh.

It was...eh.  It was entertaining enough, and it was okay with it for awhile, but the end was just so...out there.

Stars: 3
Posted by PletcherFamily at 5:23 PM