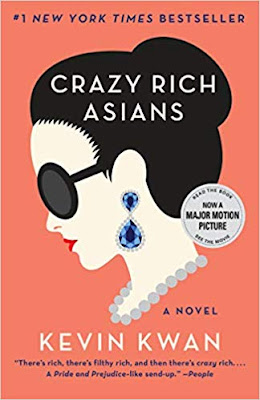 This story is about the ultrarich in Singapore.  Rachel Chu, is a middle class Chinese American whose boyfriend, Nick, invites her to spend the summer in Singapore with his family.  He has not prepared Rachel for his family who is among the Singapore elite.  Nick's mother is already trying to sabatoge their relationship because she is sure Rachel (who went to Stanford and has a Ph.D) is no where good enough for her son, since she doesn't come from a wealthy family.  But Nick doesn't care.

The two are in Singapore to attend a wedding for Nick's best friend, who is Singapore royalty.  Rachel is thrown into a huge 3 family triangle of aunts and uncles of Nick - all whom seem to have enormous fortunes.  There are few who are accepting of Nick and Rachel's relationship, and she has to decide if this is a world that she wants to be a part of.

I didn't like this book.  I thought it was long and boring, and had too many characters.  And that is saying something because I have read Game of Thrones.  This book had no character development and just spent the entire 500 pages talking about designer labels and jewelry.  These billionares never did anything but spend money on themselves and complain about anyone who was less rich than they were.  The writing was juvenille and when I saw a picture of the author I was surprised to find that it was an adult male.  Reading about nothing but designer labels and fake rich people got tiresome quickly.

Skip this.  I was hoping that because it was being turned into a movie I would give it a try.  But it was a waste of time.  Hopefully the movie will be completely different from the book.

Stars: 2
Posted by PletcherFamily at 1:01 PM