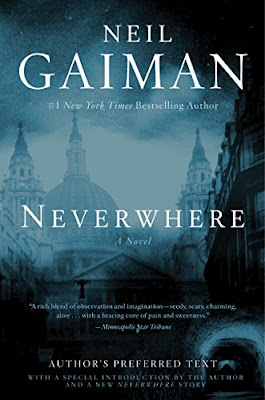 This is the story of Richard Mayhew who rescues a hurt young girl one night and ends up in the Underworld of London.  He no longer exists in London above where he had a life, a fiance, and a good job.  Now he is stuck in a world of forgotten people and places.  He befriends the girl he rescues - Door, and travels with her as she tries to discover who murdered her family.  Richard, Door, and her bodyguard, Hunter, travel between London below and London above all while being chased by two monsters as Door tries to bring a key to an angel that will unlock the mystery of her family's death.  And Richard is hoping that this will help him get home.

This was a pretty good book.  I am a Neil Gaiman fan, and this one did not disappoint.  It didn't drag, and you become invested in the characters and the story.  The only flaw I would say would be the ending.  Well - I wouldn't even call it a flaw - just predictable.  The ending was very predictable.  But the concept of the book was very neat.  The development of a parallel world - a parallel London - was well described and probably how many of us would imagine an underworld.

Check it out.  I think it is worth your time.

Stars: 4
Posted by PletcherFamily at 1:32 PM