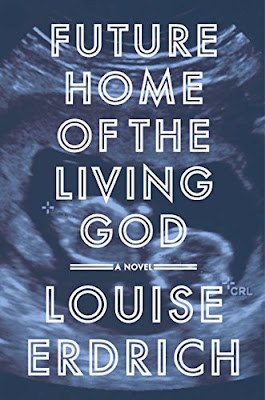 This is a dystopian future novel where the human race is reversing - going back to primitive days.  Evolution is reversing itself.  Women are giving birth to pre-primitive spiece and most don't survive.  26 year old Cedar is pregnant and now she has to hide.  She is sure her baby will be different, but all pregnant women are rounded up and kept in camps or hospitals until they give birth.  She doesn't know what the fate of these women or babies will be, so she hides.

I honestly can't write more about this book because I wouldn't encourage anyone to read it.  It was that terrible.  I should have done a better job reading the reviews before I chose this one, but this year's challenge is all about reading recommendations from others.  This idea of the book was what drew me to it.  I am a huge fan of dystopian future novels and it has been awhile since I have read one.  But this one I should have stayed clear of.  AND - I should have stopped reading it because I could barely get through it.

IT was just terrible.  Stay far far away.