Us Against You
Author: Frederik Backman
Pages: 448 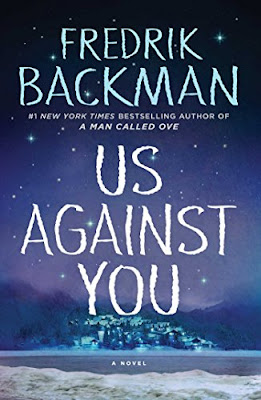 This is the follow up book to Backman's "Beartown".  The town of Beartown is still realing for a young girl's rape.  The town divided and picked their side leaving the Beartown hockey team in shambles.  The hockey team might be disbanded because it was the coaches daughter who was raped.  A lot of former Beartown players leave to play for the rival town of Hed. But a newcomer gives the town hope and soon a new Beartown hockey team is formed.  The team forms around former players of the junior team - a gang of misfits who don't quite fit in anywhere.  They have a new coach who is determined to make them a winning team regardless of how that has to be done.

Before the season ends, a resident of Beartown will be dead.  Hed and Beartown will be left to decide if hockey is really what is most important.  The towns will both be challenged and be given a choice.

This book was not very good.  I was disappointed because Backman is one of my favorite authors.  I love almost everything is writes, but this one was just not well written.  First, it is extemely melencholy.  There is never an upswing for any of the characters - which makes the story just drag.  I mean - really?  Nothing but sadness?  One reviewing on Amazon said it best "It was like a swirling snowstorm that was brewing for too long".  Nother ever really happened.  Each chapter would leave you with cliff hangers and often he would say "they would remember this day".  But then....what?  Nothing of great importance.  He did too much setting up and then things would work out fine.  There was too much of that.

I don't recommend this book.  And the rumor is that there will be a third.  I honestly think he should have just left Beartown alone and not tried to continue the story.  Because it really has no where else to go.