Two reviews in one day!  I read two books at the same time, and wrapped them up together. 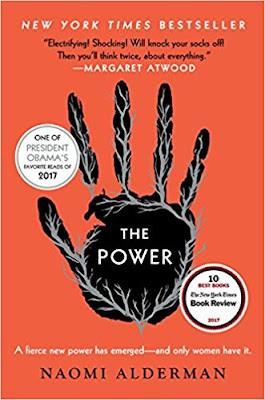 The teenage girls of the world are devloping powers.  The power comes in the form of electricity that they can generate to cause pain or even death to others.  The women have a new organ that has developed - called a skein.  Soon the power can be given to older women and the balance of the world shifts.  The book rotates through 4 main characters - one who becomes "Mother Eve" - claiming to be hearing and doing the work of God.  The men become more and more afraid and start to fight back.  The tone of the book is one where women are viewed more like objects and now with this new power, they hold the upper hand.

This was a terrible book.  I don't want to spend a lot of time reviewing it, because I could hardly make it through it.  The writing isn't good, the sex in the book is ridiculous and way out of place in telling the story, and it is overall just not that entertaining.  I love dystopian future novels - it is my favorite genre - but I could barely make it through.  I should have quit reading.

Don't bother with this book.  The idea was a great one - a chance to write about a shift in power between men and women, but it fell flat.