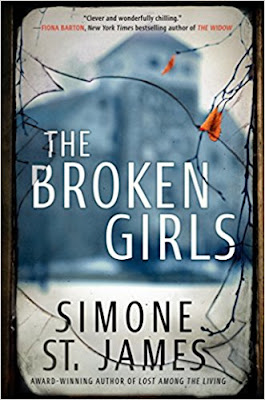 The story opens in Vermont in 1950.  There is a home for wayward girls who no one wanted called Idlewild Hall.  It is a bording school in the middle of nowhere.  All the girls at the school believe the school to be haunted by someone named Mary Hand.  They have all seen her, and Mary shows them their darkest secrets.  One day, one of the girls disappears.  The teachers think she has run away, but her friends know better.  They are sure she has been killed, but they have no way to prove it.

Fast forward to 2014 - a young journalist named Fiona is obsessed with a case that is 20 years old.  Her sister was murdered, the man is in jail, but Fiona still doesn't have closure.  She keeps revisiting the site where her sister's body was found looking for clues. Her sister was murdered on the grounds of Idlewild Hall, which has long been closed down and rotting.

Soon, Fiona finds out that a rich benefactor has bought Idlewild and plans on restoring it to a girl's school.  Fiona contacts the new owner and tells them she wants to write a story about the school and the past.  What is unearthed during the restoration starts to piece together the past of Idlewild and the missing girl, and also Fiona's sister.

This was a good book - not great.  The story was a little loose, and the events move around quickly leaving some holes in the plot.  The story lines often felt undeveloped.  The overall idea was great - I did have a few moments of chills since it was a ghost story - but not enough to make this into a great book.

It is a fast read, and easy to follow.  I wouldn't run out and recommend it, but overall, I think it was a fine read.