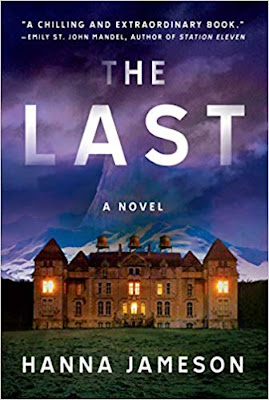 This was my 62nd book of the year.

I have decided to read 25 pages of a book that is not on my Read The World challenge list every night before bed.  I read my challenge book during the day, but right before bed, I decided I wanted to read something on my extrensive TBR list.  In my eyes it is a win/win to work my way through this challenge, which I am really enjoying, but get to read books that seem to keep popping up that I also want to read.

There has been a nucelar attack.  John is at a conference in Switzerland when it happens.  He is stuck in a hotel in a small town in the middle of nowhere.  The internet and contact with the outside world quickly disappears, and people start to panic.  Soon, most of the people staying in the hotel leave - hoping to make it to the city and to airports.  But the news is that most of the major cities have been evaporated and there is nowhere to run to.

Jon and a handful of other people decide to stay behind at the hotel and wait it out.  They have food, and some power, but there has been no sun, no rain, and the people are getting worried.  One day, the water pressure disappears and Jon and some of the hotel personel go to see what is wrong with the water tanks and discover a body of a little girl.  Jon is sure this little girl didn't get into the tank on her own, and now there is new panic about a murderer being in the hotel.

Jon becomes obsessed with the murder and starts to search room by room for clues.  In the meantime, supplies are running low and teams are being sent out to try and find what they can.  After a few months isolated and no leads on the murder, the team decides it is time to go for help.  They won't survive the winter if they don't get more supplies.

Now it is time for a decision.  Do they just venture a small way away from the hotel and come back?  Do they all leave and head toward the city and not return?  No one knows what is out there, so is it a risk they are willing to take?

This was a pretty good book.  It is quite new - just came out in April.  It was on a list of dystopian novels to read this year, so I took a chance.  The ending wasn't great.  I know books are hard to end, and this one failed.  I kind of liked where it headed, but it left a lot of questions.  Things I don't want to mention here because it will give too much away.  But it was disjointed.  It is too bad because overall, the book held my attention and made me want to keep reading to see where it was going.

Hmmmmmm - to recommend?  Maybe.  I mean - I could be alone with this line of thinking.  I just think it could have been better.