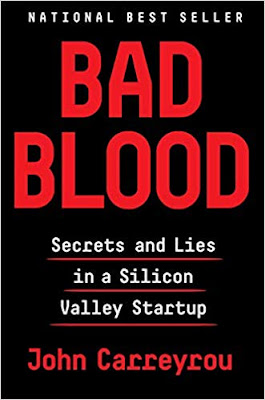 This was another book recommended to me by a friend.  Same friend as Empty Manions - and it was two wins in a row from them.

This is the true story of Elizabeth Holmes and her company Theranos.  She claimed that she was going to be able to run 100s of blood test from a drop of blood.  She wanted to prevent people from painful bloodraws and also put this technology in people's homes so that diseases could be caught earlier, and could be better managed.

The reality was - she had nothing.  No working product, no ability to draw such a small amount of blood and get accurate results.  But she lied for over a decade and took millions and millions of dollars from unsuspecting companies and people.   All of her employees had to sign agreements not to talk when they were either fired or quit their jobs.  It took one brave young employee that finally talked to the Wall Street Journal that brought the truth to light.

This was an incredible book.  I could not stop shaking my head at the fact that for 12 years this company existed, took money, and had nothing.  No product.  It is baffling that this woman and the people closest to her were able to pull this off.  Walgreens even bought it.  People like Ruper Mudoch bought into it.  They believed every lie she told.  The test that she said her machine could run all came back incorrect.  Or didn't work at all.  Employees came and went through a revolving door - not lasting long once inside and discovering what was really going on.

Today - Elizabeth Holmes company no longer exist.  She and her ex-boyfriend Sunny who ran this company are on trial for a 20 year jail sentence.  All the money is gone.  The trial is set for June 2020 to determine if they go to jail for what they did.  The could have killed people.

I recently watched the 20/20 episode on this story and it pulled the book together.  And a movie is in the works.  I am anxious to see where this all ends for Elizabeth Holmes.  My hope is jail.

The book is really good.  It is well written and thoughtful.  It pieces together the story from her leaving Stanford at age 19 all the way up until present day.  You watch it unfold in an "after the fact" fashion where it makes it hard to believe that people fell for this.  However - if you truly didn't know what was going on behind closed doors, I would have fallen for it too.

Don't miss this read - it is worth it.